As I mentioned in the last mail, the Somnath tourist places can be conveniently visited in two trips. Let us discuss the first trip- Trip A to Nij Dham Prasthan Tirth. 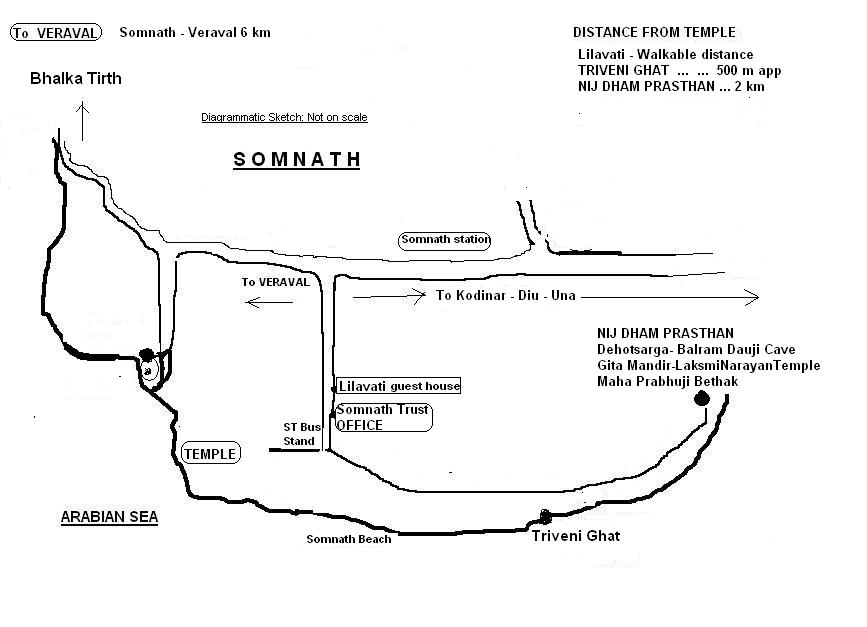 Nij Dham Prasthan is the place where Lord Krishna breathed his last in the human form and left for his heavenly abode. As your friend Neha has rightly narrated, Bhagwan Shri Krishna was shot at mistakenly by a hunter (named Jara) at BhalkaTirth. From Bhalka Tirth, Shri Krishna came to Somnath and ended his Avataar (human incarnation) at Nij Dham Prasthan (Golok Dham or Dehotsarga). Devotees pray here to Bhagwan Shri Krishna and worship His Charan Paaduka (foot prints) in the centre of the premises.

Gita Mandir is a beautiful temple devoted to Lord Krishna and Gita Mataji. There is a charming idol of Shri Krishna with a flute on his lips and a cow beside him. Gita Mandir has  marble pillars on which are inscribed the Shlokas (holy stanzas) of Shrimad Bhagvad Gita, the holy scripture. Bhagvad Gita is an ancient Indian Scripture which is a part of Prasthantrayi (three holy books of Hinduism). Bhagvad Gita contains the sermon Lord Krishna gave to Arjuna on the battlefield at the time of Mahabharat war. There are eighteen chapters in Bhagvad Gita. All these 18 chapters are written on the 18 marble pillars of Gita Mandir.

Next to Gita Mandir is an ancient cave known as Balram Dauji’s Gufa (cave). This is the place where Balram (Bhagvan Shri Krishna’s elder brother) left for his heavenly abode. He left his body as Sheshanag, so the cave is also known as Sheshanag Cave.

Laksmi Narayan (Lakshminarayan) Temple has the idols of Bhagwan Laksminarayan (a form of Lord Vishnu) and Lakshmi Mataji. Bhagvan Vishnu is worshipped as the conservator of the world. His wife, Lakhmi Mataji, is the Goddess of wealth and prosperity.

Mahaprabhuji Bethak is located near Lakshmi Narayan Temple, behind Charan Paduka of Bhagwan Shri Krishna in the Nij Dham Prasthan. Here Vallabhacharya, the proponent of Pushti Marga of Vaishanv Sampradaya, had given discourses while he toured all over India to propagate Vaishnavism in the sixteen century. Accoding to the Vaishnav sect, there are 84 Mahaprabhuji Bethak in India.

Photography/Videography is allowed at Nij Dham Prasthan Tirth complex. The Tirth complex is situated on the banks of the river Hirana. It is a picturesque place in natural surroundings. Be there in the morning before nine or after four in the eve for better photography. You will have plenty of opportunities to shoot at different points with different backgrounds and different angles. One may happily spend two hours at Nij Dham Prasthan Complex.

After visiting Nij Dham Prasthan Tirth, you may visit Triveni Ghat on way back to Somnath Temple. Triveni Ghat is hardly half-a-kilomentre from Somnath Temple. Triveni Ghat is the holy confluence of three rivers – Hirana, Kapila and Gupta Saraswati. The devotees offer prayers for their forefathers here and do rituals for the peace of the deceased relatives. Triveni Ghat offers some good views and could be developed well as a tourist attraction in Somnath. Unfortunately it is much neglected by the authorities. The place is often so dirty that a tourist hardly can spend fifteen minutes!!

Tourists may also visit Parshuram Mandir, Jaleshwar mahadev, Shankaracharya Ashram and some other religious places in this trip.

One may return to Somnath Temple after this trip. Thus, Nij Dham Prasthan Tirth trip (Trip A) can be ended at Somnath Temple from where it was started.

We will continue our Somnath trip, right?

You will love to read